Coming out of the Sadat Subway Station I was not sure if the empty space in front of me  really was Tahrir Square – where had all the people gone?

Now a symbol of the 2011 Egyptian Revolution, and having sent shivers and fear around the world for over a year,  I was surprised to see it nearly deserted, – except, of course, for the traffic buzzing around the inner circle of the square.  That inner circle is surrounded by a stone wall of about 2 feet, and is filled with sand and dirt. There are some make shift tents, and small groups of men standing around.

On that small stone wall a few old women had installed burners, brewing tea for sale and others sold water. A  tent on the far side,  displayed pictures and posters of the tragedies that had happened here. But today, on this sunny Tuesday morning,  all was peaceful – there was nothing to be afraid of – and the two old men sitting and talking added  a sense of tranquility. 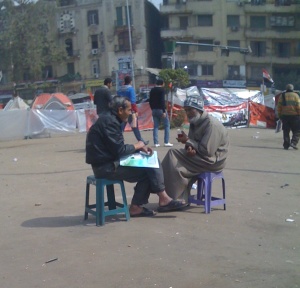 I went into the tent which displayed  pictures of the people who had died here.

Many of the images the world had seen on their TV screens over and over, but seeing the pictures here had a great effect on me and  made me very sad, but also defiant. Defiant because we should not let a moments of such tragedies, and fear keep us away. On the contrary going and seeing where it all happened is honouring those who have died here, and what their fight was  about.  And  Insha’allah make Tahrir Square be true to its name one day  -Liberation Square!

Author of Getting Over Growing Older Other titles - Dress to Impress, The Sensual Dresser, What Turns Men On.
View all posts by Brigitte Nioche →
This entry was posted in Cairo, Egypt, Tourism, Travel and tagged Freedom, Revolution, Tahrir Square. Bookmark the permalink.