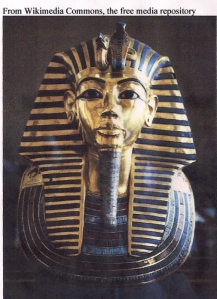 with Tutankhamun  in his tomb – just the two of us – that is exactly what happened about a month ago, when I was visiting Luxor.

Walking into his tomb, Number 62 in the Valley of the Kings, I saw him lying in a glass case. Stepping closer  I took a deep breath, realizing that this was a moment one can only dream of. But this was not a dream. There he was  in front of me, close to me wrapped in a beige cotton cloth,  just his head and feet showing.  He looked small, alone, and lost, striped of all the gold and worldly possessions he had owned and been buried with.

I don’t know how long I stood there. All I remember is that it was hard to leave. I stepped back several times only to come back again and again to take another look. I wanted to hold on to this moment a little longer – when will we ever meet again? And if we do, it might not just be the two of us – the tourist might be back!

Before meeting Tutankhamun,  I had read about his mysterious life and death. Seen his treasures and golden mask in the Cairo Museum.

Visited the exhibition that came to the Metropolitan Museum in New York many years ago. But since the discovery of his tomb in 1922 by Howard Carter, nothing has ever diminished the fascination and admiration of the world for this boy Pharaoh, who died when he was about 19, in 1328 B.C. Maybe it is the amazing contents of his tomb that makes him the most famous Pharaoh of Ancient Egypt, and bigger than life.

But here in his tomb – by the way he is the only Pharaoh who remains in his tomb to this day – Tutankhamun did not look bigger than life. Here lay a small figure, wrapped in a simple cloth, looking very vulnerable and human.

No,  taking photos was not allowed but I wouldn’t have taken one, because I don’t want to share this experience with anyone.

Author of Getting Over Growing Older Other titles - Dress to Impress, The Sensual Dresser, What Turns Men On.
View all posts by Brigitte Nioche →
This entry was posted in Egypt, Luxor. Valley of the Kings, Tourism, Travel, Valley of the Kings and tagged Egyptian Museum, Tutankhamun. Bookmark the permalink.