CAIRO – LIVING AMONG THE DEAD

The incessantly honking cars on Cairo’s street don’t slow down or stop their horns to pay their respect when passing El Arafa –  The City of the Dead.

I was astounded to see a graveyard (4 miles long) be part of  this vibrant metropolis of 22 million. It is here where today five a million people have found a home, spending their days among a dense grid of house-like tombs. Many of these tombs and mausoleums include a living room and some even bedrooms. Visiting your ancestors and spending time with them is a tradition inherited from ancient Egypt and is still practiced.

An Egyptian friend whose family has a tomb in The City of the Dead  explained that in the past they, as many other families, had  hired a guard to prevent squatters from moving in. The guard lived in the tomb with his family.

Today there are few guards, instead the poorest of Cairo’s population have taken refuge here. After the earthquake of 1992, and as a result of urban renewal demolitions and urbanization pressures they had nowhere else to go, but became squatters and live with their large families in a small space, right next to its dead owner.

An Egyptian woman prepares a meal next to a mausoleum. Photograph by Mohamed Abd El-Ghany, Reuters

Visitors are not welcomed and taking photos is even more frowned upon. Therefore, most of my photos are taken from outside the wall that surrounds the cemetery. 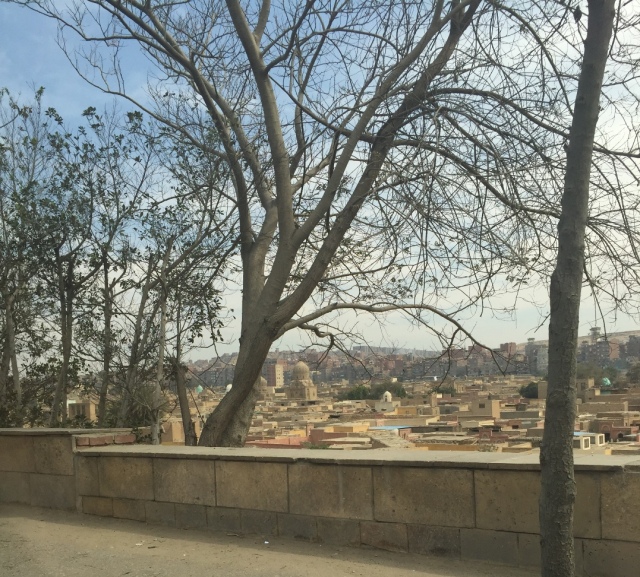 Resigned to his fate an old man told us: “I ‘m lucky, my neighbors are very quiet!”

Author of Getting Over Growing Older Other titles - Dress to Impress, The Sensual Dresser, What Turns Men On.
View all posts by Brigitte Nioche →
This entry was posted in Book of the Dead, Cairo, Children, Egypt, Government, Muslims, Travel and tagged cars, Cemetery, City of the Dead, Death, earthquake, Tombs, Urbanization. Bookmark the permalink.

2 Responses to CAIRO – LIVING AMONG THE DEAD