EGYPT’S OBELISKS – WHERE ARE THEY TODAY?

An OBELISK is a tall four-sided pillar ending in a pyramid-like shape on top.  They came in pairs and were placed in front of temples, one on each side of the entrance. When QUEEN HATSHEPSUT, Egypt’s first female pharaoh who reigned Egypt for over 20 years (1473 – 1458 BC) had two Obelisks built to stand in front of her temple in Karnak, they were the highest structures in the world.

Today one of them is still standing, but the other one has toppled over and broke in two pieces which are on the ground nearby. 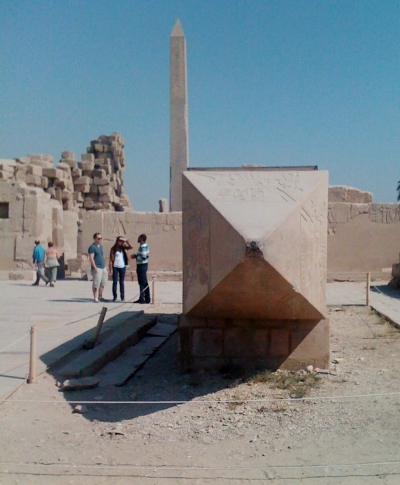 There were many temples in Ancient Egypt and many Obelisks, but the desire of other countries to own one of these beautiful monuments started their exodus around the world. They were sold, robbed, or gifted.

There are 11 Egyptian Obelisks in Italy, eight are in Rome, and one of them is gracing  Saint Peter’s Square.

England has 4 – among them Cleopatra’s Needle,  now standing on the Victoria Embankment in London. As always there were two of them, and both were brought from Karnak to Alexandria, where Cleopatra, Egypt’s last pharaoh reigned – hence the name Cleopatra’s Needle.

The other Needle is standing behind the Metropolitan Museum in Central Park in New York… it is the only obelisk the United States has.

This Obelisk in Front of Luxor Temple, is matching the one in Paris

…….and the wild traffic on Place de la Concorde in Paris circles around an Ancient Egyptian Obelisk. It once stood in front of the Luxor Temple, built by Amenhotep III , between 1390 – 1352 BC. —- its partner is still today guarding the entrance of the Temple in Luxor.

3 Responses to EGYPT’S OBELISKS – WHERE ARE THEY TODAY?