EGYPT – WE ARE TOLD IT IS SAFE AGAIN

Posted on February 1, 2015 by Brigitte Nioche

Egypt’s best-known archaeologist is a passionate showman with an explorer’s fedora who joined the last, doomed Cabinet of President Hosni Mubarak, then resigned in a swirl of corruption allegations after the 2011 revolution ousted his patron. Admired or reviled, he is once again a frontman for Egypt, exhorting international audiences to see the heritage of a country where unrest has hit tourism hard.

“Egypt is safe,” Zahi Hawass declared last week at a South African casino complex where schoolchildren roamed an exhibition of replicas of King Tutankhamun’s treasures. Egyptian hotels and antiquities sites are secure, said Hawass, who planned to welcome a tour group of 120 Americans to Egypt at the end of January.

Tourism is resurfacing, but it is a hard sell. The uprising that toppled Mubarak, the 2013 military ouster of Islamist President Mohammed Morsi, and sporadic violence have slammed the key Egyptian industry. On Thursday, militants killed 31 security force members in the restive Sinai Peninsula. On Jan. 24, a female activist was shot dead by police during a peaceful rally near Tahrir Square in Cairo, according to witnesses.

The Egyptian Museum, home to King Tut’s gold mask, lies near Tahrir Square, the epicenter of the 2011 protests. Hawass was then antiquities minister, assuring journalists that Egypt’s heritage was mostly intact despite some looting and damage. A stalwart of the old regime, he soon left his post and was besieged by allegations that he abused his position for personal gain.

“The devils came out of the sewage. They hurt me a lot,” Hawass said of his detractors in an interview with The Associated Press. He said it took two years to clear his name.

In his heyday, 67-year-old Hawass was a domineering charlatan to some and, to others, an animated Egyptologist whose antics and ebullience enlivened the staid world of archaeology for a global audience. He once starred in a TV show about his exploits and still wears a wide-brimmed hat, Indiana Jones style, to desert digs.

Now on the lecture circuit, the silver-haired archaeologist was greeted at a Johannesburg airport by a model in mock ancient Egyptian attire, miniskirt included. He told enthralled children he was a “mummy hunter” and gave two rollicking lectures at Silverstar Casino in Krugersdorp, near Johannesburg.

“When you discover a mummy, the media will run after you,” Hawass said to laughter while displaying an image of him inspecting a sarcophagus, surrounded by cameras.

In the AP interview, Hawass questioned the Egyptian Museum’s recent use of epoxy, which can be hard to remove, to glue back a blue and gold braided beard that had been detached from Tutankhamun’s burial mask. The beard was accidentally knocked off last August during work on the relic’s lighting, according to a German expert summoned to Cairo to examine it.

A thin piece of wood can be inserted into a hole in the beard and used to connect the mask parts without the need for other “material,” Hawass said. He added that he “called the people in Egypt” and urged them to inform the public about the case.

Few dispute that Hawass can be a grandstander with a pyramid-sized ego, but many scholarly peers respect what he has done for Egyptian archaeology, which is severely underfunded and under threat from illegal excavations by looters.

Hawass’ resignation as antiquities minister made no difference to his productivity as an archaeologist, and he now has time to publish his findings, said Salima Ikram, professor of Egyptology at the American University in Cairo. As to whether Hawass can return to his old job, Ikram said: “One never knows.”

Dr. Robert Littman, a trustee of the Archaeological Institute of America, said Hawass popularized Egyptian antiquities and helped give Egyptians a sense of pride in their past.

“He was able to raise money to help get the new museum built out at Giza,” Littman said. The Grand Egyptian Museum, under construction near the Giza pyramids, is scheduled to open in 2018 and will eventually house the treasures of King Tut’s tomb. The foundation stone was laid in 2002.

“Egypt always needs a military man, since 4,000 years ago,” Hawass said. “An army leader is needed now to bring stability to the streets of Egypt.”

The archaeologist, soon to tour the United States, said dismissively that his successors in government have done “nothing” for the national heritage since his departure.

“You can’t hide me,” Hawass said. “I put Egypt at the top of the whole world.”

I THINK NOW IS REALLY THE TIME TO GO!!! BEFORE WE HAVE TO COMPETE AGAIN WITH HUNDREDS OF OTHER TOURISTS TO GET CLOSE TO WHAT WE WANT TO SEE?

………AND TO PUT MY MONEY WHERE MY MOUTH IS – I AM LEAVING FOR EGYPT SOON! 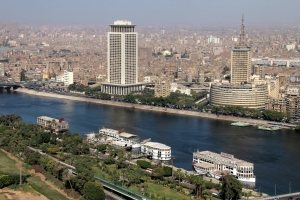 Author of Getting Over Growing Older Other titles - Dress to Impress, The Sensual Dresser, What Turns Men On.
View all posts by Brigitte Nioche →
This entry was posted in Cairo, Egypt, HABIBTI YA MASR, Tourism, Travel and tagged Associated Press, safety, Tourism, Tutankhamun, Zahi Hawass. Bookmark the permalink.

1 Response to EGYPT – WE ARE TOLD IT IS SAFE AGAIN