Posted on January 3, 2014 by Brigitte Nioche

The bus, which brought us from the airport, joined other buses in a parking lot near a large hill. Once our group was together we started walking up a sandy path. Our guide told us to be patient, that we were nearly there – but there was no sign of what I had longed to see for so many years – the Temple of Abu Simbel, the Status of Ramses II…. we kept walking. It was hot, the midday sun was beating down on us and there was no shade. I felt tired. Our wake-up call had been at 4 am because the plane to come here  left at 6 am.

….but then we turned the corner – I did not feel the heat anymore, or how tired I was — I was mesmerized – there he was, Ramses II – four times! Four colossal, sitting statues were looking down on us – making us look very small —— hardly there.

The Temples of Abu Simbel , yes there are two, one for Ramses II and a smaller one for his Queen Nefertari, were built around 1264 BC. The statues of Ramses II are 60 feet high and were sculptured directly from the rock. It took about 20 years to complete.

threatened to inundate these ancient temples. In answer to an appeal from the Arab Republic of Egypt, UNESCO started an international donation campaign to save the temples — and
under the UNESCO banner relocation began in 1964 by an international team of archeologists, engineers and skilled heavy equipment operators.

The entire site was carefully cut into large blocks –

up to 30 tons – dismantled, lifted, and reassembled in a new location – 195 feet higher and 600 feet back from the river. It is one of the greatest achievements of archaeological engineering in history.

Today looking closely at the statues there is no mark visible where the blocks were rejoined. Our guide, a well known Egyptologist, explained that when the blocks were cut apart, the sand spraying out of the equipment was carefully collected, labeled and used to seal the joints once the stones had been put back together.

The temple in the foreground is the temple dedicated to Queen Nefertari and the goddess Hathor. She was the favorite queen of Ramses II — and above one of the doorways the inscription says “–WIFE NEFERTARI MERYETMUT FOR WHOSE SAKE THE SUN DOES SHINE”….!!!

How fortunate for the world today that in 13th Century BC there were artist capable of creating a miracle called ABU SIMBEL, and that our knowledge in the 20th Century allowed us to recreate that miracle again!

P.S. Due to an earthquake Ramses II statue to the left of the entrance lost his head and upper torso, and is now laying at his feet. 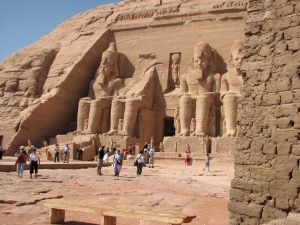