RAMSES II – CAN HE GET EVEN TALLER?

Posted on October 9, 2013 by Brigitte Nioche

The photo I posted a few days ago of a statue of Ramses II at Karnak Temple in Luxor  made him look like a giant. But it is a small giant compared to the statues he had built of himself at Abu Simbel, in Nubia, Southern Egypt.

During his reign (he was a 19th dynasty Pharaoh) in the 13th century BC two massive rock temples were carved out of a mountainside, to be lasting monuments for himself and his favorite queen, Queen Nefertari. The construction lasted about 20 years.

Their purpose was to impress – intimidate – Egypt’s southern neighbors, to show the might of Egypt and to reinforce the statues of Egyptian religion in the region – not underestimating Ramses II measure of ego and pride. And looking at the four colossal seated statues of Pharaoh Ramses II  there can be no doubt about the image he had of himself.

When during the construction of the Aswan High Dam the rising waters of the Nile threatened to submerge the temples. international donations made it possible to safe the site. The preservation of the Abu Simbel Temples began in 1964 and was completed in 1968  at a cost of USD $80 million. The stones were cut into large blocks. dismantled and reassembled in a new location – 56 meter higher and 200 meter back from the river – by many considered one of the greatest triumphs of archaeological engineering, and it is now a UNESCO World Heritage Site.

Today Ramses II, besides welcoming thousands of tourists, looks with authority over Lake Nasser, over the waters that once threatened to submerge him and his temples. 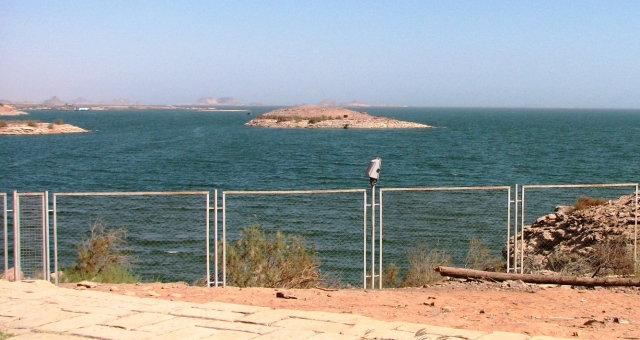 During his 67 year reign, he and the statues he had built of himself were bigger than life – and now in his afterlife, thousands of years later, he is still bigger than life!

2 Responses to RAMSES II – CAN HE GET EVEN TALLER?