It commemorates Abraham’s willingness to sacrifice his son Ishmael, before God provided him with a ram to sacrifice instead. The celebrations last four days, and children get gifts and money.

I arrived in Luxor,  on October 24, the night before. I was curious what would happen the next day, and  I asked  Sayed, the owner of the hotel. A little hesitant he replied, “Early – very early in the morning everyone goes to the mosque.” and left it at that.  It was around 4 am when out of the hills a high-pitched voice  started chanting, and gradually  the chanting increased until it came from every corner of the countryside. 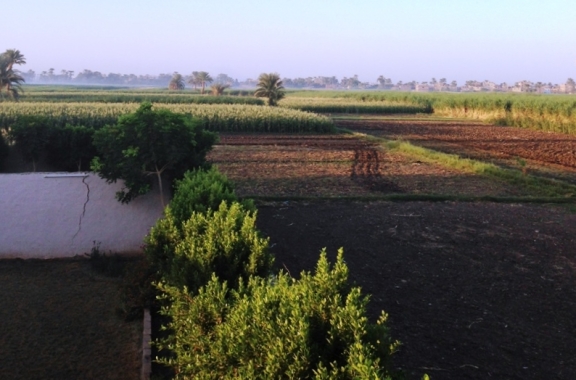 For the next two hours, while I was sitting on the small balcony of my hotel room, listening and watching the sun rise over the sugarcane fields, a magical and enlightening day started.

After breakfast, around nine o’clock  Sayed asked me to come to his house to meet his family and to see the sheep which would be sacrificed that day. In a small enclosure behind his house four sheep moved around.

The men of the house, Sayed’s brothers,were looking them over and after a  heated discussion (which unfortunately I did no understand) they had decided which two it would be. Turning to me Sayed said, ” Now we are waiting for the man who will kill them. It is a very specialized job, it has to be done quickly, with a very sharp knife, so that the animal does not suffer.”

Sayed had a large family; besides his mother there were four brothers and their wives and cousins, uncles, ants and their many children who were running around the yard and through the house. Since I did not speak Arabic, the only thing I could do is smile, and from time to time Sayed would translate something.

“He is here, come and watch,” Sayed cried when a very young man strode into the yard, carrying several knives wrapped in a  bloody cloth. I couldn’t.  “No I don’t think so. I will go and sit on the bench over there.”

and when I shrieked everybody laughed and Sayed said: “You can come back now they are dead.”

Walking back into the yard the  young man who had killed the animals was hanging them on  hooks to be skinned.

Once that was done, he cut them into a few large pieces and handed them to the women of the house to cut into still smaller pieces.

“We give a third of the meat to the poor, a third to our friends, and a third is for our family” Sayed explained.

Now his mother was sitting down on the floor and with one of her daughter-in-laws took charge of cutting and dividing the pieces.

By now it was about one o’clock and my jet lag, and the events of the morning made me want to lay down. I went back to the hotel and Sayed promised to come and get me when the meat was cooked and ready to eat.

I knew it was an honor to be invited on this special day to share a meal with all the family. Therefore, I was surprised to find out that the host and I were eating alone in the living room where a table had been sat for us and the women of the house were coming and going serving us.  The meat had been cooked with lots of onions and some kind of very thin bread – it was tasty and I had seconds.

While looking at the warm glow of the  setting sun that evening – I had the feeling that I had been far away -far away in another place and time.

Author of Getting Over Growing Older Other titles - Dress to Impress, The Sensual Dresser, What Turns Men On.
View all posts by Brigitte Nioche →
This entry was posted in Egypt, Food, Islam, Luxor, Muslims, Travel and tagged children, Christmas, Eid al-Adha, Meat, Sheep, Worship. Bookmark the permalink.