EGYPT – A VISIT TO REMEMBER

Posted on December 2, 2012 by Brigitte Nioche

Returning from my third trip to Egypt I have many photos and stories to share. But I want to start by introducing you to an interesting man  I met on two of my visits. He lives on the West Bank in Luxor, and earns his livelihood by making flyswatters – a very useful tool at times. 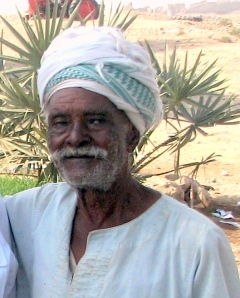 The first time we met was in October of 2010, before the January 2011 revolution. Our tour bus stopped and he was standing on the corner of the street offering flyswatters for sale. Several people from our group, including me, bought one to take home. He looked happy and content with life, selling what he had made. 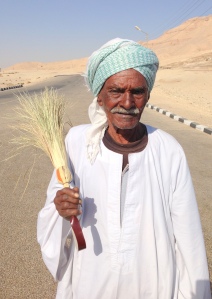 This time, two years after the revolution he stood forlorn  in the street, still offering his flyswatters. But besides our car with just one passenger, myself, there were no tourists or other cars in sight. We stopped, I walked over to him and while shaking his hand I tried to explain that we had met two years ago. But neither my Arabic or his English helped him to understand. He allowed me to take a photo again and we left.

Now back home, looking at his picture, I feel very sad, because I can see a hopelessness and anger in his face that was not there two years ago. He is a simple man, and I am wondering if he is able to understand what has happened to his country? – and why there is hardly anybody coming to buy a flyswatter anymore!

Author of Getting Over Growing Older Other titles - Dress to Impress, The Sensual Dresser, What Turns Men On.
View all posts by Brigitte Nioche →
This entry was posted in Egypt, Islam, Luxor, Tourism, Travel and tagged anger. disappointment, flyswatter, Revolution. Bookmark the permalink.

3 Responses to EGYPT – A VISIT TO REMEMBER