THE SPHINX – THE VOICE OF THE PYRAMIDS

“Sound and Light at the Pyramids is very Hollywood. I wouldn’t bother.” I was told when I asked if it was worthwhile to see it. Well, I don’t always listen and booked myself for Wednesday evening..

It was already dark when I was picked up from the hotel  at 7.30 pm. When we got to the site. a sea of empty chairs greeted us. “How many people can you seat here?” I asked the young man who was showing me the way.

“Three Thousand.”  he said with a happy, smiling face not showing any disappointment that there were barely 50 people seated. During my stay in Egypt I greatly admired that everywhere, everybody was  friendly and did not show their unhappiness about how their  life had changed for the worse due to the lack of tourists.

“Sit wherever you like!”  I had trouble deciding where, among these lonely chairs, I wanted to be. Finally I sat down in the middle of the front row. No one to my right, no one to my left, just a few people several rows back. I was glad that I had listened to the receptionist at the hotel, and dressed warm. She had warned me that it would be very cold. and it was. There was a cold wind blowing and when the lights went out a dessert dog started to haul.

Now there was only the crescent of the new moon and the evening star in the sky – and then it happened – the Sphinx came out of the darkness and started to tell  the story of Ancient Egypt and of the Pyramids.

While the lights moved over the Giza Plateau illuminating the ancient wonders, the Sphinx told us that when Tutankhamen was born in 1341B.C. the Pyramids were already over a thousand years old. And when Cleopatra, the last pharaoh of ancient Egypt (69 B.B. – 36 B.C.) was in power, she did not know about Tutankhamen. And that thanks to Jean-Francois Champollion, who had published the first correct translations of the hieroglyphs in 1822, Egypt emerged from the darkness it had fallen into.

The Great Sphinx of Giza 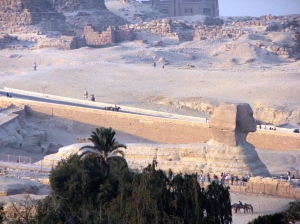 And no, its nose was not shot off by Napoleon’s soldier, it was missing long before. It is believed that during the Turkish period it served for some practice shooting. Through the century it has been buried by the desert sand again and again, and rescued again and again. The last time the sand was removed was in 1905, and since then, together with the Pyramids has become  the symbol of Egypt. 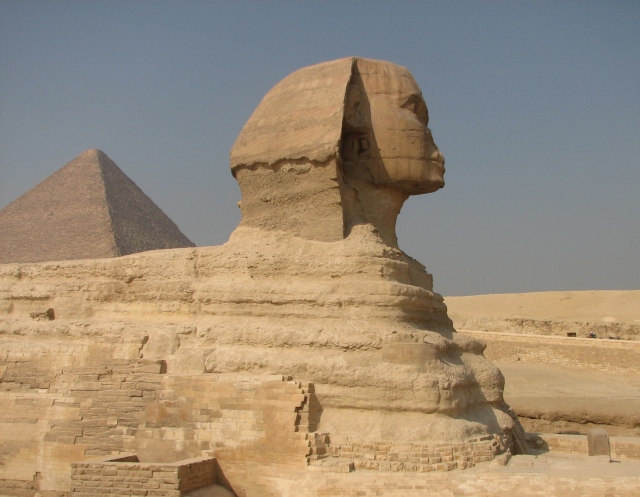 – or when you go to the ‘Sound and Light’ and listen to the story it has to tell.

Author of Getting Over Growing Older Other titles - Dress to Impress, The Sensual Dresser, What Turns Men On.
View all posts by Brigitte Nioche →
This entry was posted in Egypt, Pharaohs, Tourism, Travel, Tutankhamun and tagged Champollion, Cleopatra, Giza, Hieroglyphs, Tutamkhamen. Bookmark the permalink.

8 Responses to THE SPHINX – THE VOICE OF THE PYRAMIDS