The Great Pyramid of Giza, the Pyramid of Khufu, is the only one of the three Pyramids  on the Giza Plateau that can be visited inside.

During my first and second trip to Egypt, while visiting the pyramids I wanted to go inside, but each time my guide discouraged me.

And each time I believed him, regretting it when I came home.

During my third trip I was without a guide, and I had decided that this time I will go inside the Great Pyramid. After missing it twice I was  afraid that if I would never again come to Egypt I had missed seeing a pyramid on the inside. And not just any pyramid, but the Great Pyramid of Giza, Khufu’s Pyramid that was built for him in 2584 BC, over  four thousands years ago —- and I would regret it for the rest of my life.

So I made arrangements to go. When I had paid the driver, I went to buy my ticket. The visit to go inside I was told ” is 15 ($2) Egyptian Pounds extra.”  I didn’t mind!!!  The pyramid complex is closed off with a wire fence. Yes, it is a very long fence, enclosing the three pyramids and the sphinx. It prevents anyone from just walking around, and it is revenue for the state.

The entrance looks like the eye of a needle. It is hard to see, when you don’t know where it is.

And to reach it I had to claim up rows of huge stone. There, while taking half of my ticket, an official dressed in a white uniform and a black cap, gave me instructions which I didn’t  understand.

‘You have to show that half when you leave” a by standing  tourist explained.

“But why” I asked

‘They want to make sure that you did not slip in without a ticket.”

Tucking the rest of my ticket away, I was wondering what would happen if I had slipped in without a ticket????

I was finally where I had wanted to go since my first visit 18 months ago. There were stairs, lots of stairs.  The first set was built into the rock and I could still stand straight while walking up, but soon the climb became more difficult, not only were the stairs much narrower,  but what was worse, the ceiling was lower and lower, and while holding both handrails tight, I was folded in two crawling up the last set of stairs. 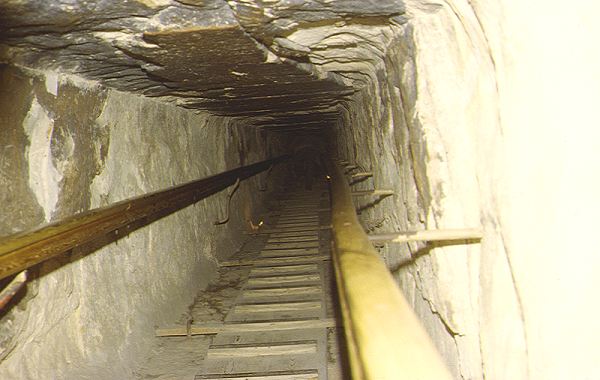 I don’t know if it was the lack of air, the stifling  heat, or my struggle to make it to the top, but I don’t remember ever feeling as hot and out of breath as when I finally stood in,  what is assumed to be, the burial chamber of Khufu —

…….  and  my guide had been right,  besides the empty sarcophagus there was nothing – no decoration, or inscriptions, just plain HUGE blocks of stone, like the one holding up the ceiling(still a mystery today of how it was put up there)  — but it was a good place to catch my breath

Leaving I felt like I was sliding out of the pyramid because I had to do it backwards now —  gripping the handrails again, and hoping for more air the further I came down.

Would I go again? NO! YES! MAYBE!  I don’t know,  but standing outside afterwards and looking up at what is today the only surviving testimony of the Seven Wonders of the Ancient World, I felt a great sense of accomplishment.

When I told a friend about my adventure he said, “I  did that when I was 25, and never again.” Maybe being 25 would have helped? 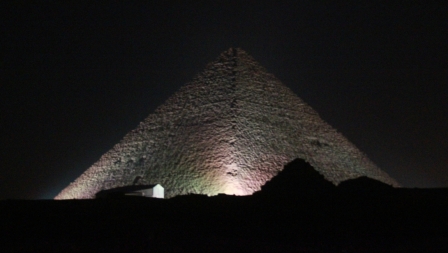 Author of Getting Over Growing Older Other titles - Dress to Impress, The Sensual Dresser, What Turns Men On.
View all posts by Brigitte Nioche →
This entry was posted in Ancient Stones, Egypt, Pharaohs, Pyramids, Travel and tagged Age, Giza Plateau, Khufu, Khufu's Burial Chamber, Pyramids, Security. Bookmark the permalink.

4 Responses to INSIDE KHUFU’S PYRAMID